The Bear, the Piano and Little Bear's Concert by David Litchfield.

The third and final book in the best-selling, award-winning ‘Bear and the Piano’ trilogy.

The first book in the trilogy - The Bear and the Piano - has sold over 120,000 copies in the UK and won the Waterstones Children's Book Prize, Illustrated Book Category for 2016

The Daily Mail - 'Litchfield’s use of light is unequalled and this is a triumphant last movement in a great symphony.’ 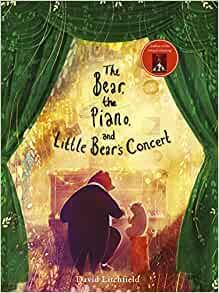 You probably remember the story of the bear who found the piano in the woods and grew up to become a huge star. He played his music in front of millions of adoring fans and all of his wildest dreams came true. But now, the audiences are smaller, the pianos less grand, and the applause is dying away. So Bear decides to retire. Back in the woods, he is sad that his dream is over but he soon has something to distract him: Little Bear! When Little Bear stumbles upon his piano in the woods, she can’t believe it when her father says that no one wants to hear his music anymore. So she comes up with a plan to prove him wrong.

The final book in the award-winning, best-selling trilogy shows that while fame and fortune might be temporary, the best songs stay in your heart forever.

Just One of Those Days by Jill Murphy

From Jill Murphy, creator of the classic Peace at Last, comes the long-awaited third story about the lovable Bear family. 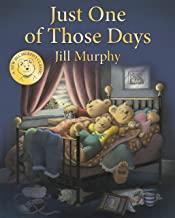 When Mr and Mrs Bear wake up late, it's raining outside – and Baby Bear is late for nursery. Then Mrs Bear sits on her glasses at work and Mr Bear spills his coffee! Oh dear – it seems this is just going to be one of those days! But the lovable Bear family muddle through cheerfully, and there's even a surprise for Baby Bear when Mr Bear gets home from work.

With all the hallmarks of an instant classic, Just One of Those Days is a gentle story about a family day, which parents and children everywhere will relate to – full of satisfying read-aloud repetition and rhythm – and with Jill Murphy's instantly recognizable, cosily-lit illustrations.